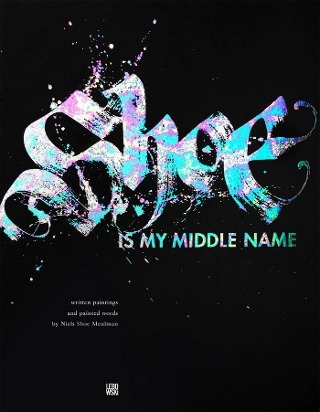 Ever since he picked the graffiti name Shoe in 1979, Niels Meulman has been carving out his own path towards the international art world. Being a graffiti pioneer from Amsterdam, he worked with American counterparts such as Dondi White, Rammellzee and Keith Haring in the 1980s. He made the transition from the streets to fine art with a unique fusion of calligraphy and graffiti, which he named Calligraffiti. This soon became a worldwide phenomenon and now plays a significant role within Urban Contemporary Art. It also sparked the catchphrase 'A word is an image, writing is painting'. In recent years Niels Shoe Meulman moved towards a style he calls Abstract Vandalism. Influenced by the great painters of Abstract Expressionism, his work has been shown in countless exhibitions all over the world and is included in the permanent collections of museums and private collections. Shoe Is My Middle Name celebrates three decades of art by a legendary graffiti artist, painter, writer, designer and calligrapher. A striking book that offers an overview of his career, showcasing his evolution through a masterful mixture of paintings, murals, poetry, interviews, graphics and insights about his identity as an artist and art itself. Bron: Flaptekst, uitgeversinformatie