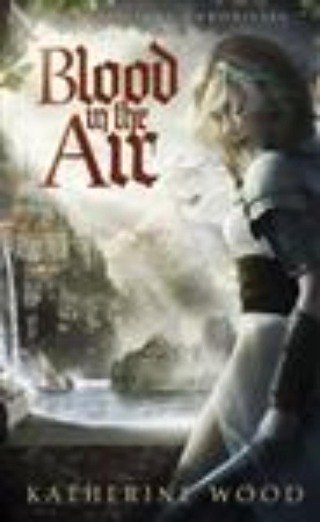 Katherine Wood Blood in the air

Meet Kari True. You'll get along fine with her, as long as you obey the law. Because Kari is an officer of the Watch. Along with her colleagues, she's in charge of keeping the mean streets around the Palace in the City free of troublemakers, wrongdoers and crime, and when the bowstrings begin to sing, the arrows start flying, and the swords start swashing, she's usually there, right in the thick of the action. She's the one you'd want watching your back in a fight. Smart, sassy, and never afraid of a wisecrack, nevertheless Kari has a dark secret which she struggles even to acknowledge to herself sometimes - for Kari is a Demokin - part Demon. Her colleagues are used to her ways, of course, and long ago learned not to antagonise her - not unless you want to be outside, down in the street, picking up the pieces of your desk, and the pieces of the window she just threw it through. It takes cop banter to a new level and gives a whole new meaning to; Elf; and safety at work! Kari's Demon background comes in very useful when she's trying to combat evil, most of the time, but, in this gripping, fast-paced mystery, it also leads her into some very dark corners, some bad places, and some very strange situations, until she's not sure who to trust any more, especially if it's her own, half-demonic self. Involved in a case in which she discovers layer upon layer of deception, and forced to work with a snooty elvish lord who patronises her every utterance, her investigation takes a dangerous turn into the underworld. Hell is ruled by the dragon Drac-Shemal, and his son Drac-Nazar, and Kari's attempts to crack this case will take her closer to the edge than she ever wanted to be, questioning the very essence of her existence. Bron: Flaptekst, uitgeversinformatie