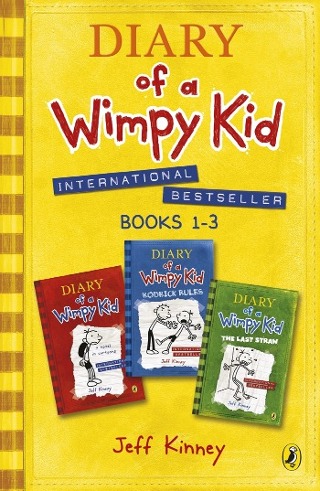 Diary of a Wimpy KidGreg Heffley finds himself thrust into a new year and a new school where undersize weaklings share the corridors with kids who are taller, meaner and already shaving.Desperate to prove his new found maturity, which only going up a grade can bring, Greg is happy to have his not-quite-so-cool sidekick, Rowley, along for the ride. But when Rowley's star starts to rise, Greg tries to use his best friend's popularity to his own advantage. Recorded in his diary with comic pictures and his very own words, this test of Greg and Rowley's friendship unfolds with hilarious results.Diary of a Wimpy Kid: Rodrick Rules Whatever you do, don't ask Greg about his summer vacation because he definitely doesn't want to talk about it . . .It's a brand-new year and a brand-new journal and Greg is keen to put the humiliating (and secret!) events of last summer firmly behind him. But someone knows everything - someone whose job it is to most definitely not keep anything embarrassing of Greg's private - his big brother, Rodrick. How can Greg make it through this new school year with his not-quite-cool reputation intact?Diary of a Wimpy Kid: The Last StrawThe third laugh-out-loud book in the bestselling phenomenon that is the Diary of a Wimpy Kid series.Greg's dad, Frank, is on a mission - a mission to make this wimpy kid . . . well, less wimpy. All manner of 'manly' physical activities are planned, but Greg just about manages to find a way out of them. That is until military academy is is mentioned and Greg realizes that he's going to have to come up with something very special to get out of this one . . . Bron: Flaptekst, uitgeversinformatie