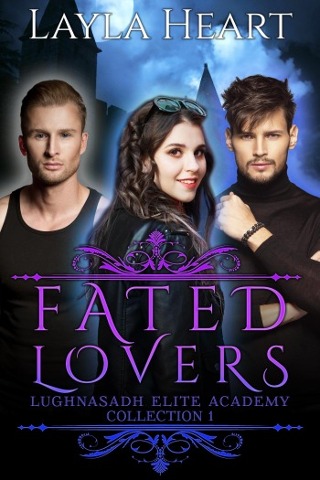 One clueless queen-to-be, sent to a magical world she didn't know existed, five lovers waiting for her prophesied arrival. Before her vital first cup of coffee in the morning, Litha finds out she's a witch and is suddenly transported to a magical world she had no idea existed. As if that wasn't strange enough, it turns out that she's prophesied to be queen, and her parents only took her to the human world to protect her from those who want to stop the prophecy from happening. The prophecy tells of a queen who will marry the 'true king' to unite all four kingdoms under his rule, finally bringing peace for the first time in centuries. The four princes who could become her king? They're all hot as hell and make her insides squirm each time she sees them. There's Bane, the werewolf prince, all broody and with hair sticking up like he just got out of bed. Kit, the incubus prince, whose wicked smile melts anyone's unmentionables. Rune, the dragon prince, protective and with muscles like he's a moving mountain. And last, but definitely not least, Finn, the fae prince, quiet but intense, with eyes like a summer forest. And to make things even more complicated, when Litha finally meets her roommate, Phoenix, the only daughter of the highest priestess of the witches, she doesn't want to do anything but kiss the redhead silly. The first day at the Academy is a little bumpy, as Litha feels so lost in this new world, but that pales in comparison to finding out her parents had to go into hiding, the documents of the prophecy having been stolen from the Academy just days before and that some of the princes have been keeping secrets which could be their undoing before anything even starts... This is a collection of the first set of three novellas, Prophecy, Curiocity and Duality in the Lughnasadh Elite Academy serial, a reverse harem #WhyChoose story. Bron: Flaptekst, uitgeversinformatie