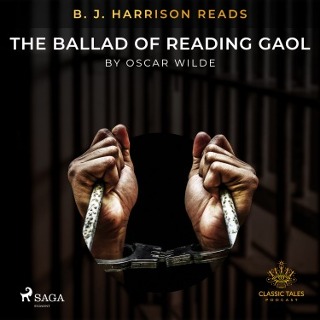 "Yet each man kills the thing he loves / By each let this be heard / Some do it with a bitter look / Some with a flattering word/ The coward does it with a kiss, /The brave man with a sword!" Oscar Wilde’s poem "The Ballad of Reading Gaol" depicts an execution and the harsh circumstances of life in prison. Based on Wilde’s own experience in prison, the poem contains details that do not judge but simply describe, in poetic terms, that which both horrifies and moves. The famous ballad from the late 19th century has lived on in popular culture and been quoted in famous works, such as the cult novel "A Clockwork Orange" by Anthony Burgess from 1962. Hear the epic lines now read by B.J. Harrison. B. J. Harrison started his Classic Tales Podcast back in 2007, wanting to breathe new life into classic stories. He masterfully plays with a wide array of voices and accents and has since then produced over 500 audiobooks. Now in collaboration with SAGA Egmont, his engaging narration of these famous classics is available to readers everywhere. Oscar Wilde (1854-1900) was an Irish author, poet and playwright, who became one of the most famous – as well as scandalous – playwrights in London in the late 19th century. Wilde is remembered for his witty plays, such as "The Importance of Being Earnest" and his Gothic novel "The Picture of Dorian Gray", set in the Victorian era. His works have lived on in stage and film adaptations. Recent adaptations of his stories include the film "Dorian Gray"(2009), with Ben Barnes as the famous main character. Bron: Flaptekst, uitgeversinformatie