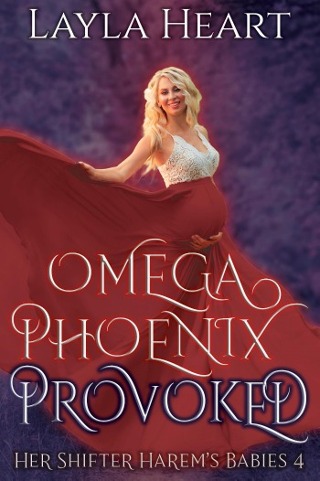 Cyra finally has all her mates back, but now they have to fight to make it through the rest of Cyra's pregnancy alive... After weeks of being in hiding with two of her Alpha mates, griffin Spence and centaur Liam, not knowing where her other two Alpha mates, hydra Zack and cerberus Max, are or if they're even alive, the five mates are finally reunited. Though things haven't gotten much easier since then. From the moment Cyra agreed to attend the Night Gala with Max and Liam, and running into Zack and Spence at the party, everything seems to have gone wrong in her life. She's been hounded by the paparazzi. Her parents have been spreading lies about her in the media, including that she supposedly has already been promised to another Alpha. Two of her mates have been kidnapped and sent to the other side of the world. And they've all been attacked, multiple times. Now, at ten weeks pregnant, Cyra is about to fight her toughest battle yet. Not against her parents, or the media, or society at large, but against the kidnapper of her mates. An Alpha phoenix who is convinced that Cyra, the first Omega phoenix in generations that the world knows about, belongs with her, and she's already proven the lengths she'll go through to get Cyra for herself. The whole world watches as Cyra fights for her life, for her mates and her family. As Cyra does everything in her power to make sure that they have a future, that their struggles from the last couple of months haven't been for nothing. She shows the world that it's dangerous to underestimate an Omega, especially an angry Omega phoenix. She shows them that she won't stop until her family can finally live in peace, no matter what she has to do to get it. This is the fourth and final book in the Her Shifter Harem's Babies series, a paranormal Omegaverse reverse harem #WhyChoose story. This book may include any of these elements: steamy scenes, 'I need tissues NOW' moments, cries of 'why, oh, why' and cliffhangers that make you bite your nails (and curse the author). Bron: Flaptekst, uitgeversinformatie