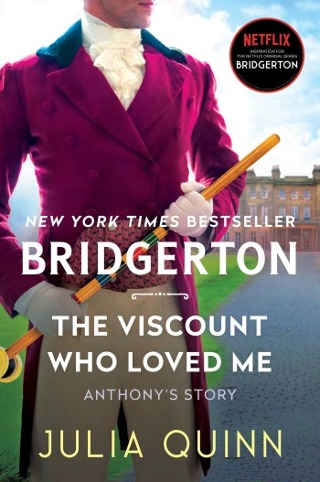 Julia Quinn The Viscount Who Loved Me With 2nd Epilogue

1814 promises to be another eventful season, but not, This Author believes, for Anthony Bridgerton, London's most elusive bachelor, who has shown no indication that he plans to marry. And in all truth, why should he? When it comes to playing the consummate rake, nobody does it better... --Lady Whistledown's Society Papers, April 1814But this time the gossip columnists have it wrong. Anthony Bridgerton hasn't just decided to marry--he's even chosen a wife! The only obstacle is his intended's older sister, Kate Sheffield--the most meddlesome woman ever to grace a London ballroom. The spirited schemer is driving Anthony mad with her determination to stop the betrothal, but when he closes his eyes at night, Kate's the woman haunting his increasingly erotic dreams... Contrary to popular belief, Kate is quite sure that reformed rakes to not make the best husbands--and Anthony Bridgerton is the most wicked rogue of them all. Kate's determined to protect her sister--but she fears her own heart is vulnerable. And when Anthony's lips touch hers, she's suddenly afraid she might not be able to resist the reprehensible rake herself... Bron: Flaptekst, uitgeversinformatie