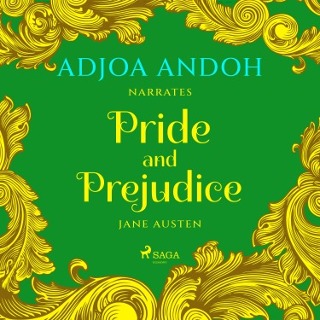 Rediscover one of the greatest love stories of all time with this new audio edition of Pride and Prejudice, masterfully narrated by actress Adjoa Andoh ('Bridgerton', 'Doctor Who'). Pride and Prejudice's prolific status as a beloved story is thanks to its dynamic, ever-evolving central characters, as well as the strength of the wit and satire wielded by Austen. It is a love story, yes, but it is also a profound critique of Georgian high society and the plight of women. Without a male heir, the Bennet daughters risk losing their home and their income when their father, Mr Bennet, passes. To save the family, the sisters must marry - and most importantly, marry well. It is in this predicament that we find the smart and spirited Elizabeth Bennet, who despite pressure from her family, is determined to live and marry on her own terms. The arrival of the haughty, wealthy Mr Darcy who is impervious to her charms begins a timeless comedy of manners, and endless drama, where first impressions are just not what they seemed. Pride and Prejudice is a classic tale with numerous screen adaptations, most notably the BBC’s TV adaptation starring Colin Firth and an Oscar-nominated film starring Keira Knightley. British actress Adjoa Andoh has had a prolific career on both the stage and screen, from starring roles in the Royal Shakespeare Company and at the National Theatre to popular television Bridgerton and the Witcher. She now delivers a captivating performance, breathing new life into this much-loved novel. There are few authors as iconic as Jane Austen (1775-1817). Her body of work contains some of the most beloved books and characters of all time which have been in print for over two hundred years and sold millions of copies worldwide. Austen was a trailblazer, famed for her satire, her astute social commentary and her strong-willed, passionate heroines. Her ability to wield humour with realism has found her favour with critics and readers for generations. Her most famous works include Pride and Prejudice (1813), Emma (1816), Sense and Sensibility (1811) and Persuasion (1818), all of which have received success in adaptations for the screen, stage and radio. Bron: Flaptekst, uitgeversinformatie