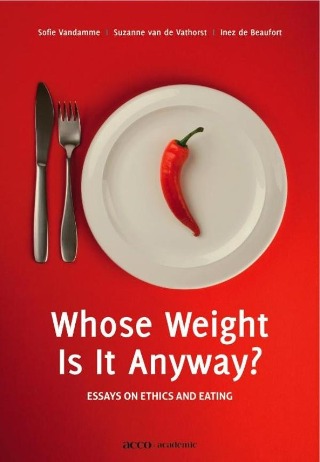 Whose weight is it anyway?

essays on ethics and eating

It is a simple truth: nobody can do without food. But to solely describe food as a biological need would be too limited, neglecting the fact that food is a social and cultural practice as well. Despite its appearance, food is not even morally neutral. It is this moral aspect that is being explored in the book. Scholars from various disciplines address the ethical perspective of changing food habits in general, and the promotion of healthy eating in particular. While it is certainly the case that some people consider their health when deciding what to eat, health is seldom the only motive for their choice. What many campaigns for healthy food seem to neglect, is the fact that the way we eat and what we eat is related to our personal and social identity and to culture and tradition. As such, food comes with a lot of values. The interdisciplinary approach of this book is unique and offers insights from a raneg of fields such as sociology, psychology, history, philosophy, and feminist studies.