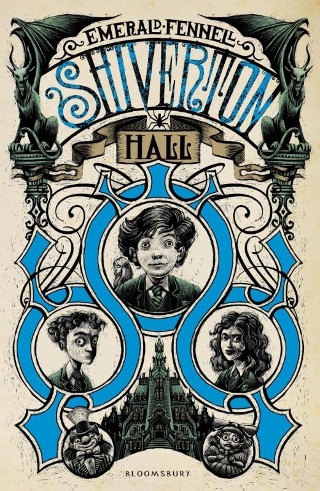 "They slowed as they reached the gate; two stone columns, each with its own crumbling angel perched on top. The angels held up a rusty, wrought-iron arch that read, in curling, serpentine letters: SHIVERTON HALL.Arthur Bannister has been unexpectedly accepted into Shiverton Hall, which, as it turns out, is an incredibly spooky school, full of surprises. And it is just as well that Shiverton Hall has made its offer, because Arthur had a horrible time at his previous school, and was desperate to leave. Timely indeed . . .But Arthur has no time to worry about the strange coincidence. He is too busy trying to make head or tail of Shiverton Hall, dogged as it is by tales of curses and bad fortune. At least there are a few friendly faces: George, who shows him around; also Penny and Jake. But not all the faces are friendly. There are the bullying Forge triplets for starters. And then there is the acid tongue of the headmistress, Professor Long-Pitt, who seems to go out of her way to make Arthur's life a misery.Luckily Arthur has his new friends to cheer him up. Although there are some friends that you don't want to have at all, as Arthur is soon to find out."