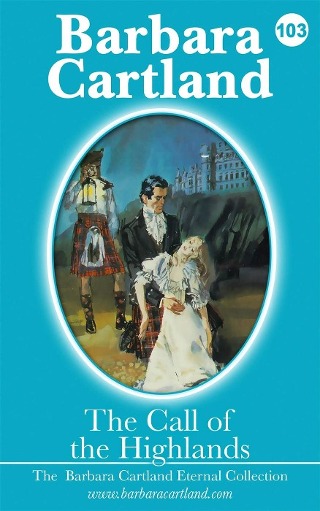 Barbara Cartland 103. The Call of The Highlands

Handsome, noble Lord Alistair McDonon's gay life, as a denizen of London's Beau Monde far, far away from his Scottish roots, comes to a sudden and abrupt end. When the tragic news arrives that his two brothers have drowned at sea, he is summoned to Scotland by his estranged father not only to take up his title of the Marquis of Kildonon and position of heir to the Chieftainship of the Clan but also to marry, Lady Morag McNain, in order to unite their Clans, who have been at war with each other for centuries. Horrified, Lord Alistair hastily proposes to his current lover, Olive Beverley - only to be refused and it seems that he is doomed to a loveless marriage in the windswept and distant Highlands. Suddenly, though, everything changes when he overhears a delicately beautiful young woman, called Arina, desperately begging the heartless Olive for enough money to pay for her beloved mother's life-saving operation. Alistair steps in to help Arina, asking in return only that she accompany him to Kildonon Castle pretending to be his wife. So now no one can force him to marry Lady Morag - but little does Lord Alistair know that his demure 'young pretender' will soon be laying an irrevocable claim to his heart! Bron: Flaptekst, uitgeversinformatie