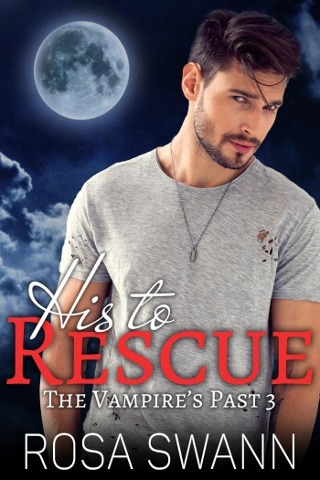 Rosa Swann His to rescue

When your present starts to look a lot like your past, and there is only one way to ever be free of it... Sean After telling me that he's a vampire on the run from a vampire hunter, basically out of nowhere, Jules is once again running away. This time he's hoping to find a way to be free of the hunter for good, while keeping us safe at the same time. But he doesn't know that we're not safe here either, and with Liam in the hospital, I have no idea how I can protect anyone anymore... Jules I can't believe that my twin brother Tyler is here, that he's been following me, trying to find me, for as long as I've been running away. I thought that he was safely at home, but he's been in danger the whole time. And as I'm trying to find a way to definitively get rid of the hunter, my past crashes into my present when I find out that the hunter has taken Tyler, again... With Sean's help, I need to find Tyler and get rid of that hunter for good, or we'll never have a happy future together... This is the third and final short novel about vampire Jules and human Sean in The Vampire's Past series. It takes place in a world with all sorts of creatures, vampires, werewolves, mages and, of course, humans, but there are also hunters, trying to rid the world of the un-humans. Bron: Flaptekst, uitgeversinformatie