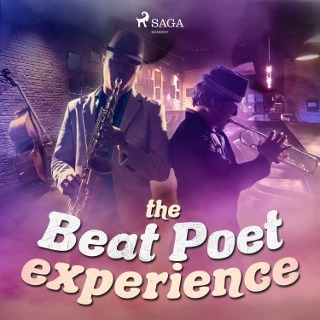 "The Beat Poet Experience" is formed around the poetry and dynamism of performance artist David O'Kelly, paying more than a passing nod to the Beat Poets of the 60’s. It embraces warmly all that we love and hate about ourselves with a wry twist of phrase and some of the hottest jazz licks his side of New Orleans... Reflecting the major works of Beat works such as Allen Ginsberg's "Howl" (1956), William S. Burroughs's "Naked Lunch" (1959) and Jack Kerouac's "On the Road" (1957), the Beat Poet Experience joins these members of the Beat Generation as one of the new bohemian hedonists celebrating non-conformity and spontaneous creativity. This audiobook contains songs, lyrics, and poems that have been written and performed over the last two decades in New York, Prague and London. It is Beat Poetry with an English twist and an eye to the odd, crazy frailty of human nature with incredible performances from some of the best players currently on London’s vibrant jazz scene. These are poems about life, death and magic. Each track is an episode of delicate organic sound and lyrics. Incorporating a number of different styles and sounds, such as jazz, blues, reggae, punk and classical, as well as live performance, the Beat Poet Experience is always theatrical, sometimes a little crazy but inevitably an event that leaves the audience feeling that they have participated in a psychedelic rush of language, social commentary, humour, spectacle and serotonin inducing euphoria. An uplifting connection back to those anarchic happenings of the sixties and seventies, firmly plugged into the zeitgeist of 2010, The Beat Poet Experience is fast becoming a quality fixture in the musical theatre, performance art genre and will bring energy, poetry and drama right to your doorstep. Bron: Flaptekst, uitgeversinformatie