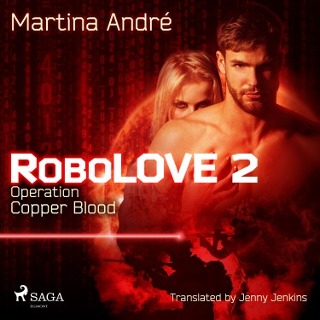 PanAmerican States, 2056: Lennox Copper can’t get over the violent death of his wife or his sense of guilt. When he is kidnapped by government troops and converted into a hybrid soldier, his fate seems to be sealed. He manages to flee and finds a new home with the rebels at Hunter’s Lane, but when he is tasked with saving global influencer and spoilt celebrity Jill Ambush from a treacherous assassin, using his charm to win her over for the rebel organization, his traumatic past catches up with him. To fulfil his mission, he must take on the role of Jill’s bodyguard and enter into a passionate relationship with her. It’s a dangerous game. So when Lennox falls in love with Jill’s daughter, Emma, all hell breaks loose. The assassin is hot on their heels and Emma unknowingly harbours a deadly secret that could cost them all their lives... RoboLove Operation: Copper Blood. Romance. Humour. Suspense. The second part in the RoboLove series by Martina André. Bestselling German author Martina André was born in Bonn in 1961. She has published several successful books including the well-known Templar novels. Martina André lives with her family near Koblenz and in Edinburgh, Scotland, which has become her second home. Bron: Flaptekst, uitgeversinformatie